X-Ray examination creates images of bones to help in diagnosing injuries or conditions. The body passes through ionising radiation in small amount produced by the X-Ray machine that is made to fall on the film to produce an image. The radiation administered depends on which area needs to be filmed. When compared to a large area like spine, a small area like hand will receive lesser dosage. Radiographer or a radiologist is the health practitioners who conduct X-Ray examinations and prepares the findings report. 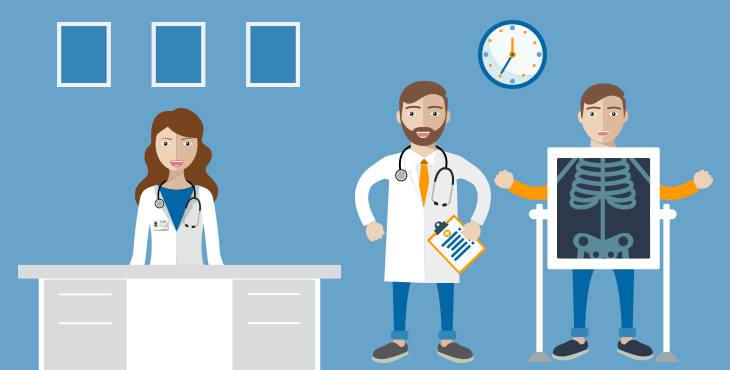 How does X-Ray Works?

During the X-Ray, a small amount of ionising radiation is passed through the body. Earlier it went to a sheet made of special film, but now the examination uses a device to capture the X-Ray transmitted to create an electronic image. The bones block the radiation and displays as white or grey in the image. The radiation passes through air spaces. The lungs appear black.

Chest X-Ray can take the image of the heart, airways, blood vessels, chest bones and lungs with the help of a small amount of radiation. The process can be used to diagnose chest pain, breathlessness and persistent cough. The patient is made to stand in front of the image plate and hold their breath for a few seconds till the image is taken.

X rays are used to study the distinctive facial features and diagnose genetic disorders. Apart from physical examination the head circumference, length of the arms and legs, the distance between the eyes and others are studied through imaging from X Rays.

An x-ray may be required to diagnose a problem that is hard to see in a physical examination. The X-Ray can be done in any area. Though, the risks are the baby is exposed to low radiation which can harm the cell.

The X Rays are imaging tests that use small amount of high-energy electromagnetic radiation to produce images of the brain. Brain X-Rays do not pass through bone and only through the skin or soft tissues. The brain X-ray shows bone injury. The X-Ray picture shows the bones surrounding the brain, nose, sinuses and facial bones.