All You Need to Know About First Trimester Tests During Pregnancy 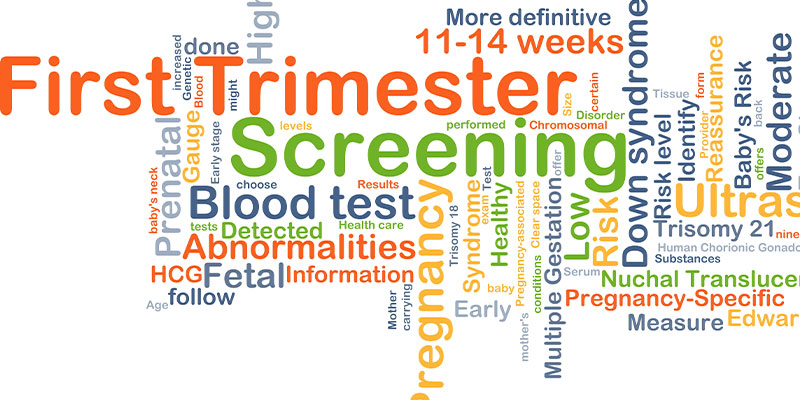 First trimester tests during pregnancy are called prenatal screening tests. It helps to detect the abnormalities and understand growth status of a baby in the womb. A few abnormalities that can be detected through early screening in an unborn foetus are chromosomal and genetic disorders like Edwards Syndrome and Down's Syndrome.A few other scans that check for disorders in unborn foetus are anamoly scans, performed between 18 and 21 weeks. They also play a major role in ruling out both genetic and chromosomal abnormalities. In this article, let us discuss the various screening tests done during the first trimester of pregnancy.

Different Types of Tests Done in the First Trimester of Pregnancy

The prenatal testing includes a pelvis examination and a pap smear test, which checks for cervical health. The pelvic examination helps in detecting the presence of sexually transmitted diseases like gonorrhoea and chlamydia. Doctors collect urine samples regularly during the pregnancy period from the expecting mothers to check for protein and glucose. The urine samples help to spot the presence of protein and glucose that could cause preeclampsia, a disease induced due to pregnancy causing high blood pressure.

Pregnant women will be offered genetic testing during the second half of the first trimester, which is completely optional. The first trimester screening has two major primary tests and a few secondary tests follow if the results are not clear.

The ultrasound examination is a safe and painless test that uses sound waves to click pictures of the baby's position and shape. Ultrasound scanning measures the clear space in the tissue behind the baby's neck. This is called nuchal translucency.

Women can have normal babies even when their reports state that they are at a high risk. If the risk level is high or moderate, the expecting mothers may choose to go for some secondary tests. They are:

Prenatal cell-free DNA screening is known as non-invasive prenatal testing (NIPT). It is a sophisticated blood test that examines the foetus's DNA to determine whether it is at any at a risk of Down's Syndrome, extra sequences of chromosome 18 (trisomy 18) or extra sequences of chromosome 13 (trisomy 13). A few forms of cfDNA also screen for other chromosomal problems and offer information about foetal sex. However, a normal result here will elimiante the need for an invasive prenatal diagnostic test.

The CVS diagnoses chromosomal conditions like Down's Syndrome. It is performed during the first trimester with a sample of placental tissue. The chorionic villus sampling has a small risk of causing a miscarriage.

Amniocentesis helps diagnose neural tube defects like Spina Bifida and Down's Syndrome. The test is performed during the second trimester with an amniotic fluid sample removed from the uterus. Similar to the CVS, amniocentesis also has chances of causing miscarriage.

The quad test is also known as the quadruple marker test. It is a prenatal test which measures the hormone levels in the blood. The hormones are:

The quad screening is done between 15 to 20 weeks of pregnancy. Sometimes doctors advise women to combine the first trimester screening with the quad test to get detailed information about the foetus. Quad screening evaluates the baby's risk for the following conditions and enables the doctors to make a confirmed diagnosis about the abnormalities.

Also Read: A Deep Insight on What to Expect From an Anomaly Scan

Reasons to Perform the First Trimester Screening During Pregnancy

The first trimester screening tests are carried out between the 11th and 14th week of pregnancy. These are crucial as they diagnose chromosomal problems, especially for Down's Syndrome and Edwards Syndrome, during the early stages of foetal growth. Down's Syndrome causes an impairment to both mental and physical health. On the contrary, Edwards syndrome affects various parts of the body and is life threatening.

The first trimester screening is essential for parents who have genetic disorders or the expecting mothers who:

What to Expect From a First Trimester Screening Procedure?

The doctor will discuss the reports with the patient in detail. They interpret the results of the ultrasound scan and blood test with the age of the expecting mother. They check whether it is safe to go ahead with the pregnancy or if the baby is at risk of any chromosomal abnormality like Edwards or Down's Syndrome. When the expecting mother's family has a history of any genetic disorder, the baby will be at a higher risk of acquiring those diseases.

If the reports have not detected any abnormality, the unborn baby and its mother are fit and healthy. On the other hand, if the report shows any signs of abnormality, the doctor will recommend the expecting woman to opt for a non-invasive prenatal test, CVS or amniocentesis. These secondary tests will give more clarity to the scenario.

The Bottom-line
As we wrap up, the first trimester screenings are approximately 85% accurate in detecting abnormalities. Furthermore, expecting mothers will be diagnosed based on their health, medical history of their family and age. Feel free to contact Anderson labs for performing anomaly scans in Chennai, as we are well-known for our accurate findings. We are one of the reputed diagnostic centres using cutting-edge technology to improve healthcare outcomes.